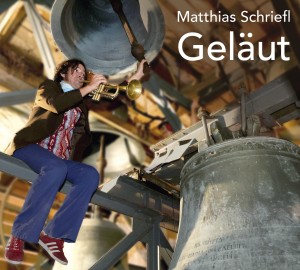 To be released officially on June 24, 2022
With the band GELÄUT, Schriefl founded a band with the singer Sarah Buechi, the cellists Susanne Paul and Mathilde Vendramin and the brass player Johannes Bär, a long-time musical companion. The compositions served as the basis for concerts between spring and late summer 2021 at the respective locations with a band, the bells and local musicians as bell ringers.

To do this, Schriefl manipulated the bells with rope constructions that were attached by climbing. Melodies and rhythms could ring out from the towers and at the same time music could be played by the band on the church squares.
Thanks to these concerts, the local residents were able to perceive their church bells again and, after the seven-month concert-free period, could again experience lively music performed together. This CD is the document of a very special concert tour, which reverberates for a long time. The aim of the CD is to point out the sound culture, effect, symbolism, history and above all the beautiful sound of the many church bells in European cities. The CD contains tailor-made compositions for almost all performance venues, which were premiered on site.

"I have had the honour of mixing half of the songs on this record. It has been a mind-altering experience. The compositions are based on the harmonies of different church bells from specific churches, chapels and cathedrals throughout Europe.
The instrumentation includes entire churches (sometimes more than one at a time), harp, cello, tuba, trombone, trumpet, flugelhorn and alphorn as well as incredible vocal parts.
Stylistically the pieces range from Indian to Bavarian folklore sprinkled to taste with heavy metal and modern jazz and at the same time it is funky as hell. Words definitely fall short to describe this divine onslaught of sound.
As a little side effect of this production every church bell I hear now automatically becomes the intro to one of the songs on the record. Totally nuttso!
I love this album and I hope it gets a load of attention. Thanks so much to Matthias Schriefl for trusting me with these babies." Philipp Zdebel, May 2022